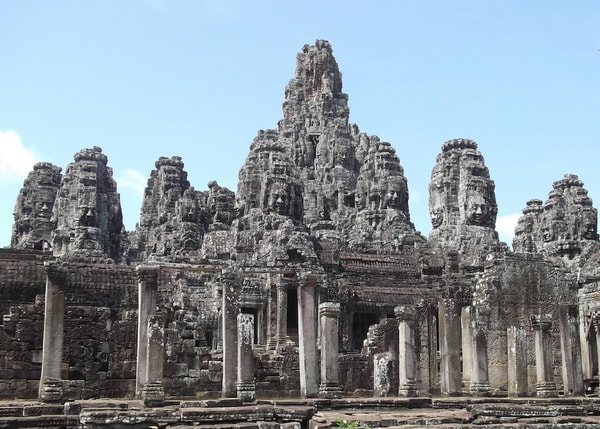 Ugh, I have really struggled to start this post. First I was just so excited about Cambodia, but ,after looking through our pictures from Phnom Penh, all these horrifying images of skulls and faces of people massacred in Cambodia came back to me. Seeing all those images brought back memories of disbelief that we can be so inhumane and horrible to each other. This got me in a very negative place and topping those memories were some quite nasty food poisoning memories from Cambodia. But I’ve decided to march on through those memories and write all the beautiful stuff I do remember from Cambodia.

So we were coming down from China (our old home country) through Vietnam, where we mainly felt scammed all the time. Vietnam was hard for us since we were still feeling ’Chinese’ with our ’Chinese money’ but suddenly not having a common language to explain that we’re actually ’Asian’ rather than white tourists from Europe. When we entrered to Cambodia we felt a bit more at ease with this dilemma. Cambodians were treating us well. Even though bartering was necessary at least the starting prices weren’t ridiculous anymore. So our first feel to the country was already super good. But like I said, Mr Merry ate an egg Subway on the bus from Vietnam and I guess the heat, bus and egg just wasn’t a great combo and he was down the first day. And of course our first hostel didn’t have toilet doors, they opted to a lovely curtain instead. So our fairly fresh relationship was put to a nice test when I had to survive through the noise and smell of the other person ejecting everything out of himself from all ends. As you can probably imagine by now, I wanted a toilet door as soon as possible, so we found a FINNISH guesthouse to stay in. I would have highly recommend this Suomi Bar Guesthouse for any Finn missing Finland on their journey around Asia but it doesn’t seem to be open anymore since the owner was found dead in 2015. It was so funny to be eating makkarakeitto (sausage soup) in Cambodia. Safe to say all this had a novelty factor to us since Mr Merry had never been to Finland and I’d been out of Finland for over a year. I can still vividly remember watching ice hockey in the blazing Cambodian heat.

Phnom Pehn for us was a capitol of fancy buildings and a horrific history. I was obsessed wanting to see the school that was turned into a house of horror and of course the Killing Fields. I have to admit that after the Tuol Sleng Genocide Museum visit we were already feeling like maybe this idea was bad. The history is really horrifying and there’s so much evidence left behind of every person killed. On our way to the Killing Fields, Mr Merry was already feeling like he didn’t really want to go and the Killing Fields really did leave a permanent scar to my heart of all the horrors humans are capable of doing. Specially it was horrid because during our visit we had a huge tropic rain fall: As we were under covers listening to the Killing Fields audio saying that during heavy rains body parts arise from the ground. Yup.. We were quite quiet after that. There’s a good movie called the Killing Fields, that can explain all of this complicated history to you. Otherwise I think Phnom Penh does have many things to see. We just unfortunately were doing visa runs and resting at our Finnish Guesthouse.

On a bus again and off to Siem Reap. We were really looking forward to Angkor Wat and I don’t think that will disappoint anyone. Absolutely amazing! But it was really so much larger than I imagined and you really need to get yourself a tuk-tuk driver for the day. We were such tight arses and bargained our tuk-tuk driver so down, half way to the day I felt bad for him: So if this is your one day at Angkor Wat, please pay your driver well. He’ll be waiting you around all day long in the blazing heat not earning anything else than what you pay to him. Also remember to wear a good hat and loads of sun lotion. It is open to a lot of sun and Cambodia is super hot! Siem Reap had some nice markets and cafes. I did a day of shopping whilst Mr Merry sorted out his Thai visa. We ate our first crickets ever in a random shop shared by a woman having a little snack. Cambodians really gave me a good vibe. They were genuine (at least most of them) and good hearted. Unfortunately also very poor and could really feel that any penny I could use on them was needed. We were unfortunately running out of our Chinese money quickly and therefore made some stupid choices like a room without air conditioning. I’ve never felt so hot and uncomfortable. Do not try this on your holiday.